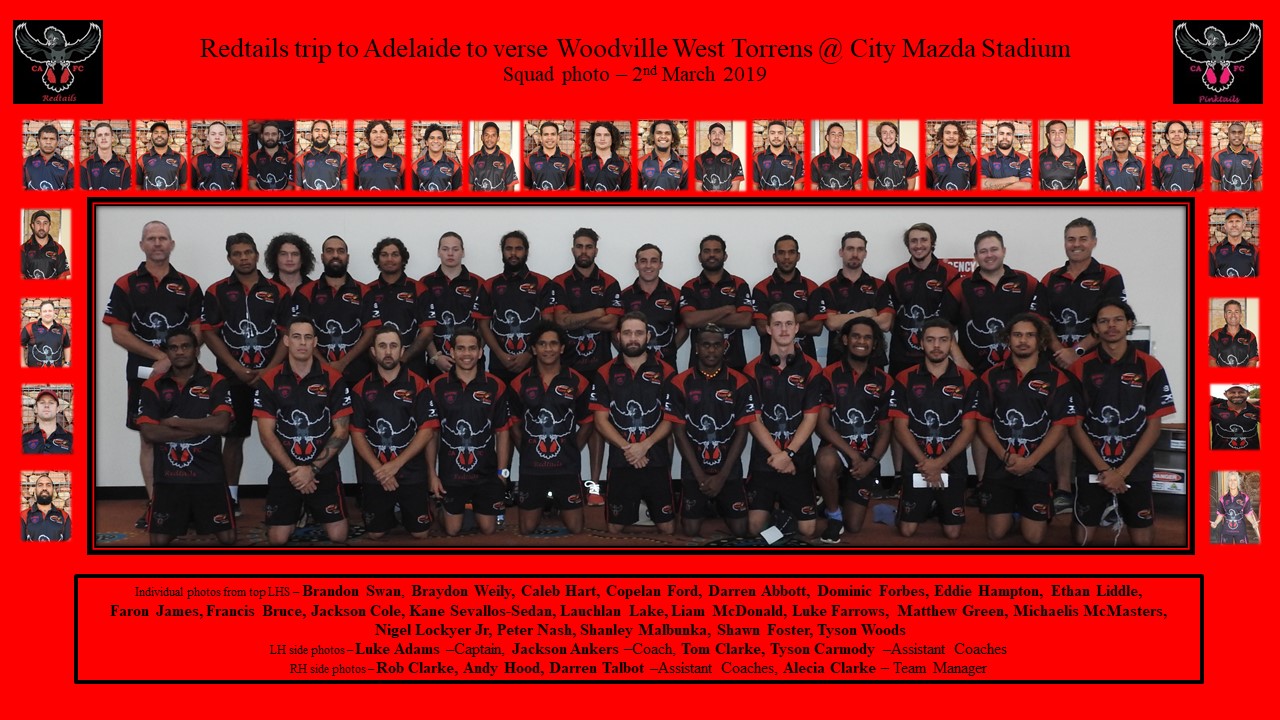 1st Quarter: The Redtails took the first 5 to10 minutes of the first quarter to settle into their roles and structures set by Coach Ankers. In this time Woodville West Torrens were able to acquire the first point followed by a goal of the game. Lake and Swan from the ruck had plenty of talent surrounding them in the midfield line up of Adams, Cole, Liddle, McMasters, Nash, Sevallos-Sedan, Abbott and out wide to wingmen Weily, James and McDonald. These men used their quick gathering skills and stealth like agility to propel the ball to our eager athletic forwards E Hampton, Bartee, Ford, Woods and Lockyer Jr, who got us on the board with the first goal and closely followed by Woods with 3 for the term. Our Defenders, G Hampton, Green, Malbunka, Foster, Hart, Farrows and Forbes had their work cut out for them with some intense attacking lines from their opponents. They battled strongly and with lots of support to contain the opposition to 2goals 3 giving us a narrow lead of 9 points after the first term.

2nd Quarter: Ford got into the action early in the 2nd quarter taking a strong mark and sealing a goal followed by a minor. Our backline were under siege from a relentless attacking flurry from W/West Torrens, Forbes, Farrows, Foster, Malbunka and Hart threw their bodies into the battle executing some amazing tackles, spoils, smothers, interceptions and anything they could manufacture to restrict the opposition to 3goals 3. Woods got creative up the other end for us adding a 4th goal to his tally and Lockyer Jr a minor keeping us just in the lead by 2 points at the half time interval. Liddle who had been instrumental in many midfield possessions and creative forward movement had to retire from the game injured.

3rd Quarter: The half time break didn’t assist our lads as they struggled to regain their momentum and drive. W/West Torrens seized the opportunity and got busy with 3goals sending our backline into panic stations. The Redtails contingent tried to maintain their composure with everyone working hard and some endless gruelling efforts by Green, Abbott, Adams, Bruce, Lake, James and Sevallos-Sedan in the midfield to get the ball to our creative forwards. Lockyer Jr being a prime target somehow managed to get his boot at low altitude and at a sideways action to powerfully connect and had the footy sail amazingly through the goals. The crowd was thrilled with the inventive and incredible goal, standing and applauding such a unique display of athleticism. Woods was the only other goals scorer for us leaving us trailing now by 35 points after W/West Torrens kicked 5goals 1 for the term to our 2goals.

4th Quarter: True to Central Australian form we didn’t hang our heads or hang up our boots, we fought back even when the odds didn’t look promising. Woods used his cheetah like agility and acceleration to gather and goal for us sending a positive vibe to the rest of the players and a belief that the game was not over. Farrows 1st, 2nd, 3rd & 4th attempts at defence, closely supported by Cole, Hart, Forbes, Foster and Malbunka, to deny any addition to the W/West Torrens score, only increased the belief and drive from the rest of the Redtails squad to fight on. Green, Abbott, Adams, Nash, McDonald, Bruce, James and Lake increased their work rate giving our defenders options and linked up with some impressive ball movement to forwards Ford, Sevallos-Sedan, E Hampton, with Woods and Lockyer Jr being the main targets for the final attempt at goals. Lockyer Jr added another 2goals 2 points and Woods a minor. We ran out of time in the end but managed to reduce the lead to only 16 points with our scoring attempts of 3goals 4 for the term to W/West Torrens 3 minors. It was an exciting game with plenty of inspirational football action and entertaining moments demonstrating our Central Australian creative brand of Footy. The crowd were not left disappointed, rather excited, inspired and hungry for more.