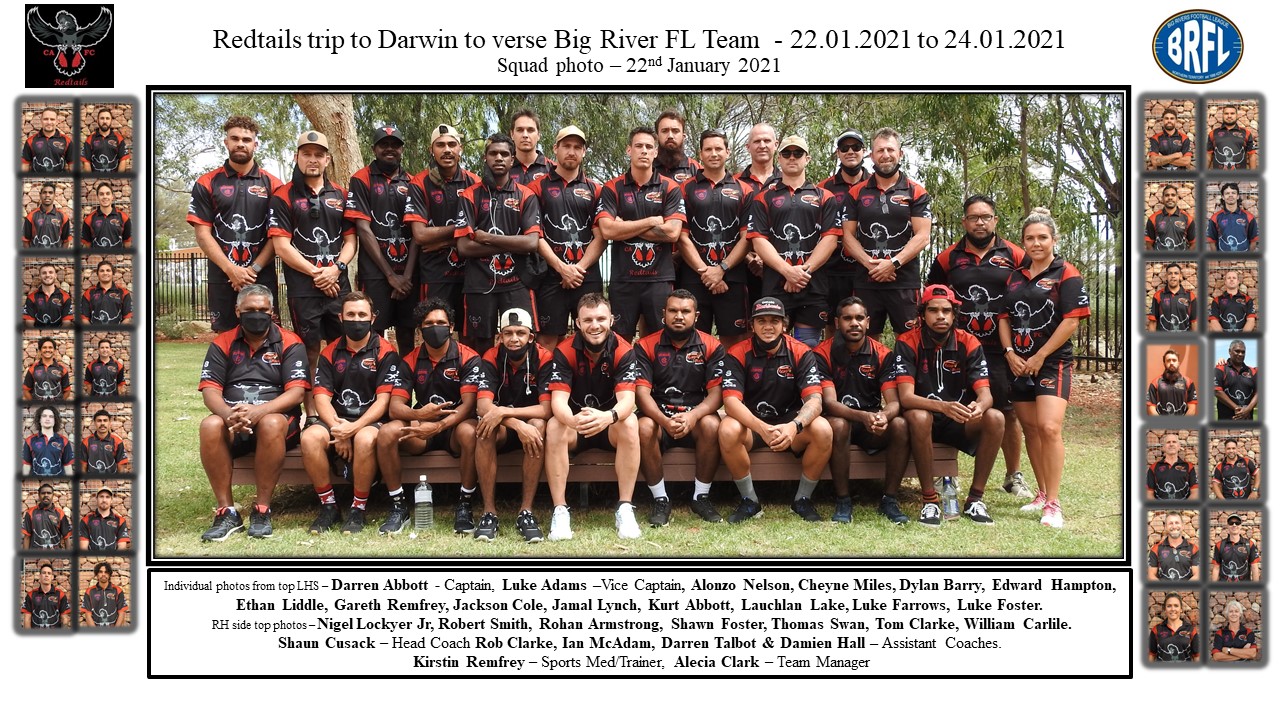 1st Quarter: From the warm up the playing groups energy level felt high even in the quite stifling hot and humid conditions that Darwin is renowned for. From the 1st bounce the intensity from both sides was intense as players pounced on any opportunity to get their hands on the ball, not excluding our midfield contingent with Carlile and Miles confidently competing in the ruck knowing they had strong support from Remfrey, Barry, Clarke, Liddle, Darren Abbott, Adams, extending out wide to the wingmen Swan, Lynch, Shawn Foster & Nelson. Once propelled forward we had the talent of Luke Foster, Kunoth, Lockyer Jr, Smith, Stafford and Veteran Campbell creating scoring opportunities with Lockyer Jr, S Foster, Stafford and Smith each kicking a minor while Kunoth got our 1st  and only goals for the quarter. Our Defenders were not left our of this scrimmage, experiencing many BRFL entries into their defence zone. The defensive intercepts, tackles and pressure from, Cole, Kurt Abbott, Hampton, Lake, McAdam, Farrows and Armstrong were spectacular, relentless and allowed us to maintain a lead of 8 points at the end of a very intense 1st quarter.
Redtails 1-4-10 to BRFL 0-2-2

2nd Quarter: With all of the initial nerves out of the way the Redtails settled into their practised team structures to generate some very smooth and exciting passages of play. Lockyer Jr got busy upfield kicking 2 goals 2, including Barry and Kunoth with a goal each and minors from Campbell, McAdam and Stafford. Downfield Cole continued to do and exemplary  job to keep the renown Patrick under pressure and Armstrong was only a breath away to assist with some outstanding silky smooth defence of his own along with the calm, experienced and resilient efforts of Farrows, Lake, McAdam, Hampton and K Abbott. Carlile and Miles continued to use their big bodied presence in the ruck and around the ground effectively.  The extensive gut running work and extraordinary ball skills carried out by Remfrey, Barry, Clarke, Liddle, Adams, D Abbott, S Foster, Swan, Lynch and Nelson across the centre enabled many opportunities for us and helped to extend our lead by 30 points as the players left the field at half time for a well earnt break to cool off and rehydrate.
Redtails 5-9-39 to BRFL 1-3-9

3rd Quarter: As a storm was moving closer the air around the ground cooled, generating a surge of renewed energy to the players as the Redtails unleashed, exhibiting their signature Central Australian style of fast moving, skilful and exhilarating football. Everyone was up and about searching for a lead or opportunity to gain possession of the ball. The flurry of forward entries had many lining up for scoring opportunities, consequently D Abbott, Barry, Armstrong, Kunoth, Adams and Smith snapped minors while Barry, Lockyer, Kunoth, S Foster were all successful with a goal each and Stafford raised the bar with 2 goals totalling 14 scoring shots for the quarter and increasing our lead to 64 points. Redtails 11-17-83 to BRFL 2-7-19

4th Quarter: The final quarter witnessed the skies open up with a deluge of rain pouring onto the grounds and a reduction in light as dark clouds engulfed the area. Unfortunately the Redtails had an extremely strong prevailing wind to try and run and kick the ball into making forward movement extremely challenging, not to mention scoring shots problematic and difficult. Lockyer Jr kicked our only minor while our Veteran Matt Campbell was the only candidate successful in slotting us a goal that he basically ran into the square with and dribbled it through. BRFL had more success and more advantageous conditions going to their end of the field allowing them to add their best scoring tally per quarter with 3goals 3, but not enough to get close to our lead. Our lads enjoyed the wet weather experience of sliding through masses of water and a chance to adjust and try our some wet weather skills. It was a well earnt victory by 50 points.
Redtails 12-18-90 to BRFL 5-10-40

A massive Thank you to our wonderful Sports Med volunteers – Kirstin Remfrey, Tim Watkins & Renee Elliott.
The work they do is greatly appreciated and invaluable to allow our players to get the best out of their bodies at training sessions, in the game and to recover afterwards.

Thanks to Head Coach- Shaun Cusack and Assistant Coaches- Rob Clarke, Ian McAdam, Darren Talbot & Damien Hall, Runner- Darren Talbot, Board Rotation –Ebony Miller.
These Team Leaders do so much more than just instructing the team how to play, they volunteer their time to help mentor, guide and assist these young men to navigate their everyday lives and to develop healthy lifestyles and positive outcomes. 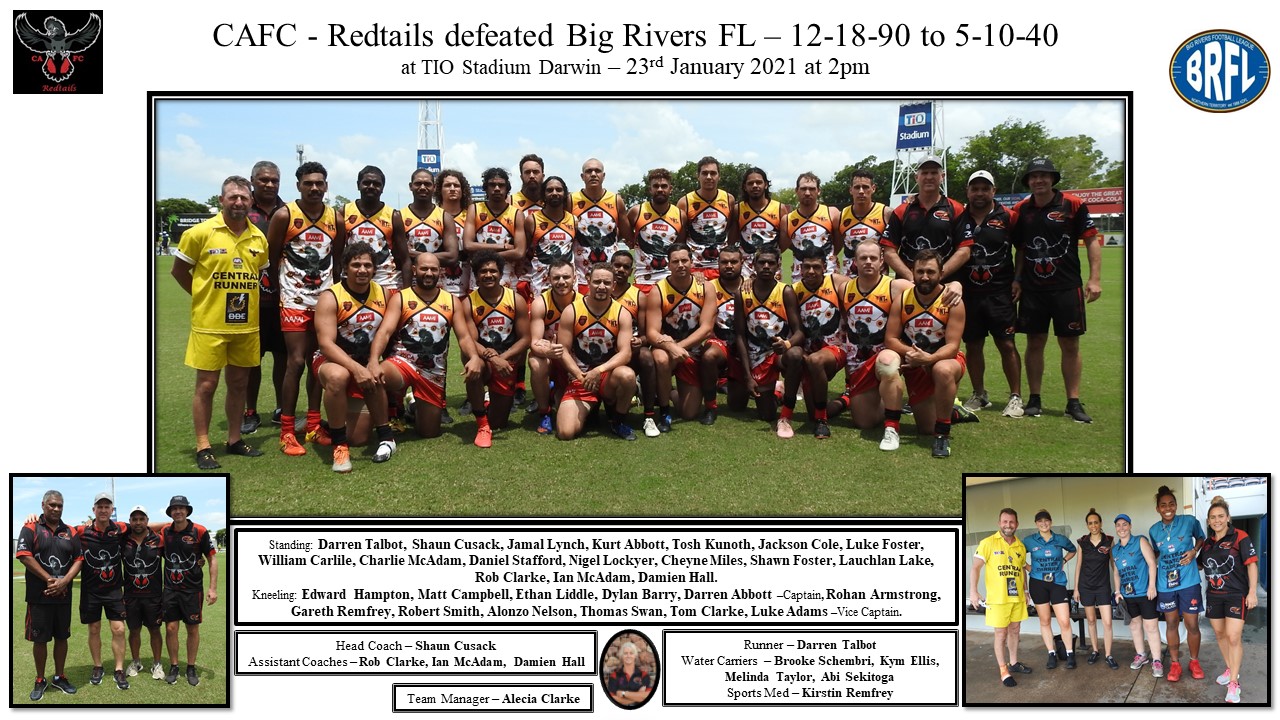 The Redtails Senior men played in Darwin over the weekend against the Big Rivers Football League (Katherine region) in a much anticipated rematch which seen Katherine take that honour way back in 2009.

With good representation from most clubs the fellas had been preparing for this match since well before Christmas and it showed in the result. On the day the players had to endure the full brunt of Darwin weather playing in energy zapping hot and humid  conditions in the first half, then in the second half torrential rain and flooding!

Best on ground and Redtails Vice Captain Dylan Barry said “ It was awesome and I’m honoured to wear the Redtails jumper, it’s a massive program to be a part of, it was a really good result in the end. It’s all about coming together and making our families proud”.

Leading up to the game the players attended a Nutrition session conducted by Jacinda Roberts (former CAAC Dietitian) and Right Track. We also follow the players up with employment support and if needed Health/ Wellbeing.

The Redtails success will never be based on what the score board says at the end of a game. Our success is based on the impact the Redtails and Pinktails experience has on our players. We want the players to come away with the knowledge that preparation is key, not only in footy but in life. So throughout the season Right Tracks support Football, Basketball and Netball Clubs 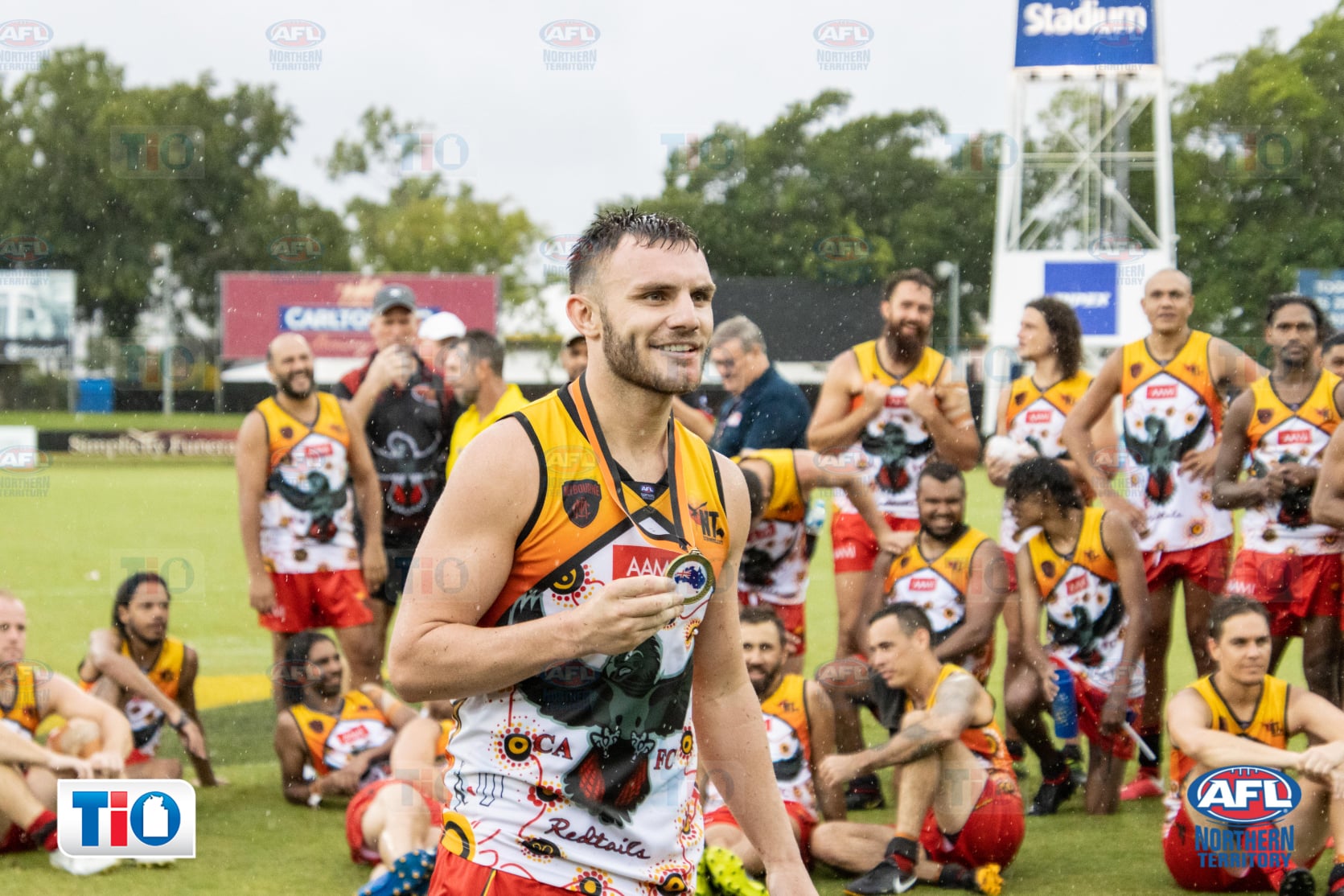