HomeNewsPinktails - Around The Campfire Cup Tournament (3)

The Pinktails return to Adelaide to compete in the Around The Campfire Cup Tournament at Alberton Oval on Saturday the 14th of October 2017. 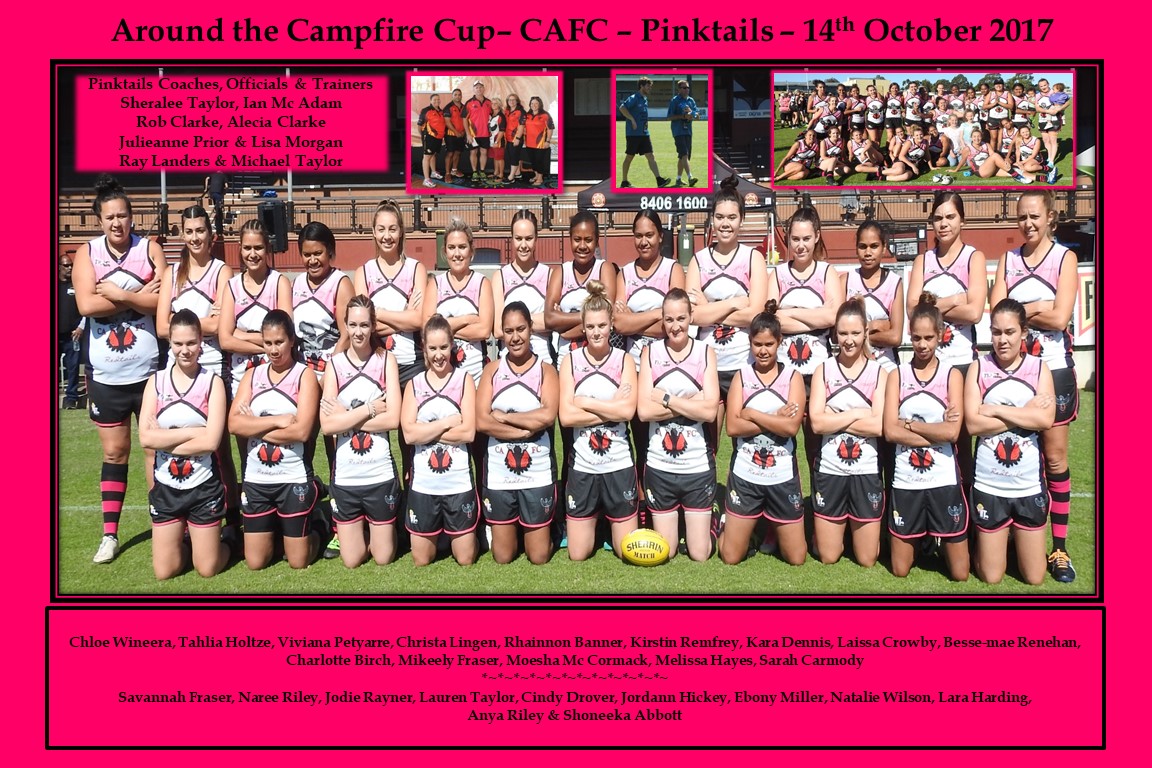 An unconventional night’s rest was experienced by our squad prior to our game day on Saturday. Around 1am the whole motel was woken by a very loud recorded message telling us all we needed to evacuate. The culprit was a gentleman who had overdone his drinking & set off the fire alarm thinking he was operating the elevator. So finally, after the Fire fighters & Motel Manger had checked the premises & escorted the vocal & aggressive culprit out of the building we all tried to settle back into some restful sleep before having to rise at 7.30am.

Our first game was against Port Adelaide. The Pinktails took to the field at 10.40 & got straight into business. We had the majority of the play in our forward area from the strong & fluent work by Miller, Crowby, Harding, Carmody, Mc Cormack, Anya, Remfrey, Petyarre & Savannah across the midfield. There was plenty of creative leading & ball gathering from Renehan, Rayner, Wineera, Abbott, Wilson, Mikeely, Taylor, Drover, Birch & Holtz in our forward line up, their shots at goals were a little rushed at times resulting in our 2goals 8points for the 1st half. When the ball made its way to our back liners, Hayes, Nerida, Hickey, Lingen, Banner & Dennis, they swiftly & efficiently dealt with it projecting it straight back to our midfield girls holding Port scoreless for the game. Our girls kicked a lot straighter in the 2nd half adding 4goals 4points to take out the first win by 48 points.
Goal Scorers were Lauren Taylor 2 goals, Shoneeka Abbot, Kirsten Remfrey, Charlotte Birch & Ebony Miller with 1goal each.
Best on ground was Ebony Miller, Sarah Carmody, Lauren Taylor, Laissa Crowby, Rhiannon Banner & Anya Riley. Pinktails 6-12-48 to Port Adelaide’s 0-0-0

Game 2 against the SA Indigenous team was a high intensity game with plenty of pressure from both sides. Miller, Mc Cormack, Hayes, Holtze, Carmody & Petyarre continued their successful drive from the centre as the temperature warmed up considerably on the field. Taylor, Renehan, Drover & Wilson generated some sound forward activity creating scoring opportunities for 5goals 3points in the 1st half to SA’s 1goal. The Outstanding defensive display from Hickey, Banner, Remfrey, Nerida, Lingen, Savannah & Dennis continued in the 2nd half making it very hard for SA to break through & score leaving them with a final score of 2goals 1 point. Our girls added another 4 goals to seal the win by 53 points.
Goal Scorers were Cindy Drover 4goals, Lauren Taylor 3goals, Charlotte Birch & Besse-Mae Renehan 1goal each.
Best on Ground was Viviana Petyarre, Moesha Mc Cormack, Lauren Taylor, Melissa Hayes, Rhiannon Banner & Jordann Hickey.Pinktails 9-3-66 to SA Aboriginal All Stars 2-1-13

Game 3 was against Adelaide Uni who were ultra-keen to avenge our last encounter with them in last year’s comp. This was our hardest game of day. With heavy legs the girls struggled to kick straight when their goal opportunities arose only achieving 1 point in the first half. Adelaide Uni proved to be a much fitter outfit seeing our girls struggle to keep up with their opponents. Hickey, Banner, Remfrey, Lingen, Nerida, Dennis & Savannah in the Backline had the biggest job of the day to try and defend a continual attack & they were able to hold them to the 1 point in the 1st half & only another 2goals 1point in the 2nd half. Renehan, Holtze, Wilson, Mikeely, Rayner & Abbott provided good run & drive in the forward line having to contend with 3-4 defenders on many occasions making it hard to get a clean shot at goals. Drover & Taylor had 2 scoring shots in the 2nd half but were only minors seeing us concede our 1st loss of the day by 11 points.
Best on Ground was Jordann Hickey, Ebony Miller, Kirstin Remfrey, Rhiannon Banner, Anya Riley, Kara Dennis. Pinktails 0-3-3 to Adelaide 2-2-14.

So, it was into the Grand Final against Adelaide Uni with some very tired girls. Credit to them all though as they ran out the game using up the last bits of fuel & energy that they had left. Adelaide Uni got in a quick few goals straight off & set themselves up to with a 3goals 2points lead in the 1st half to a scoreless Pinktails. They only added a further 1goal 3 points in the 2nd half & once again we couldn’t quite add any score for us giving the Uni a 29-point victory to take out The Around the Campfire Cup.
Best on Ground was Ebony Miller, Jordann Hickey, Melissa Hayes, Tahlia Holtze, Lauren Taylor & Rhiannon Banner.  Pinktails 0-0-0 to Adelaide Uni 4-5-29. 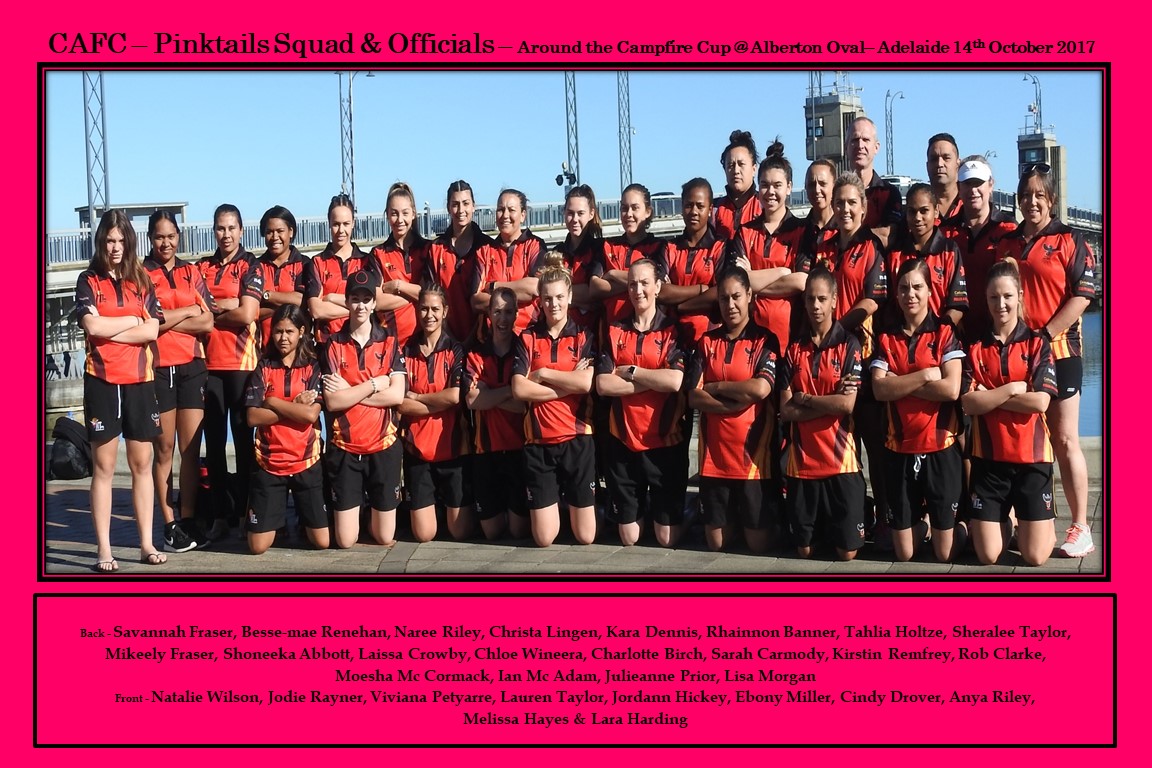