Central Australian Redtails verse The Top End Storm on the 27th May 2018 at Traeger Park - Televised by Channel 7 to The Nation. 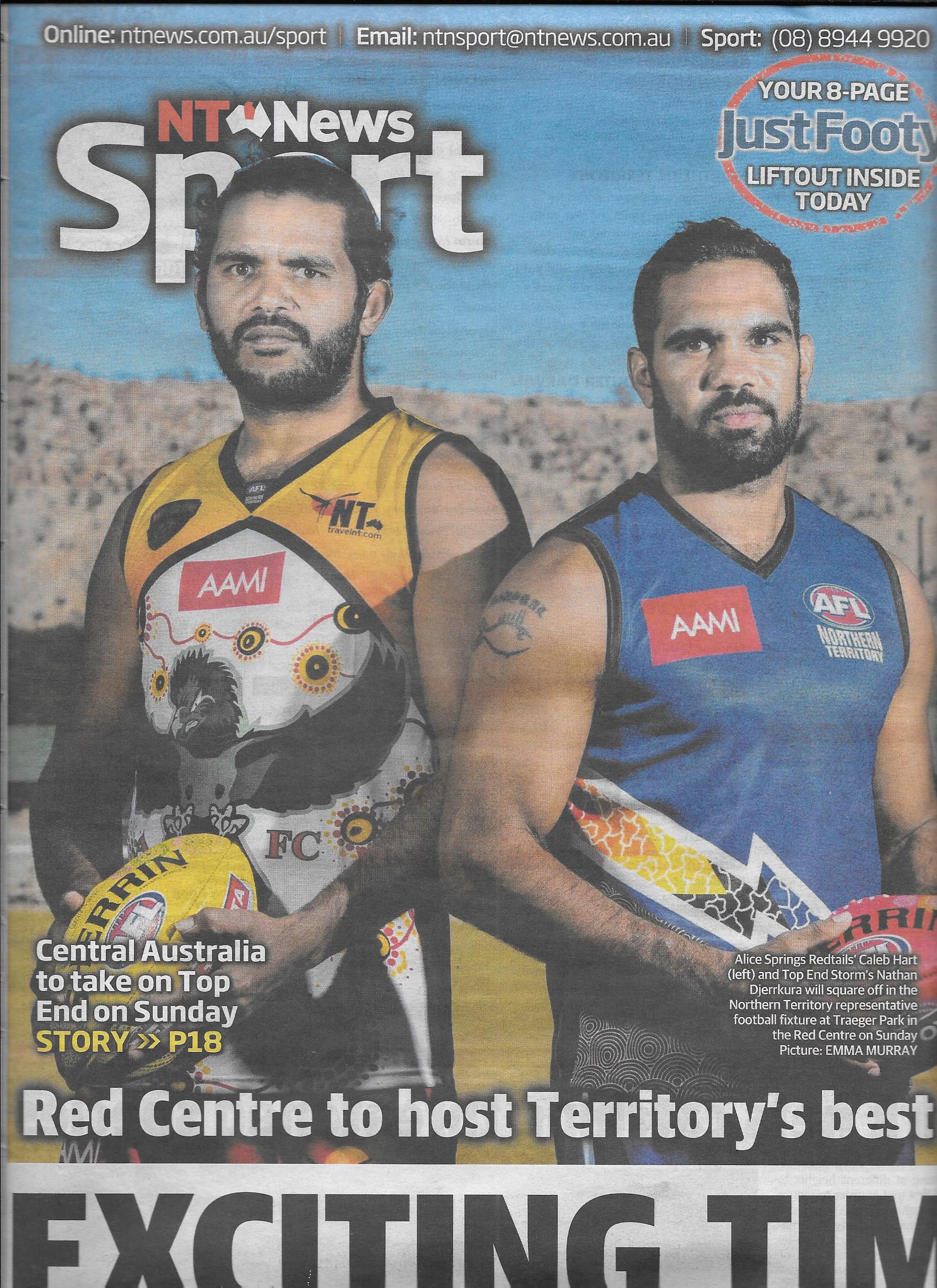 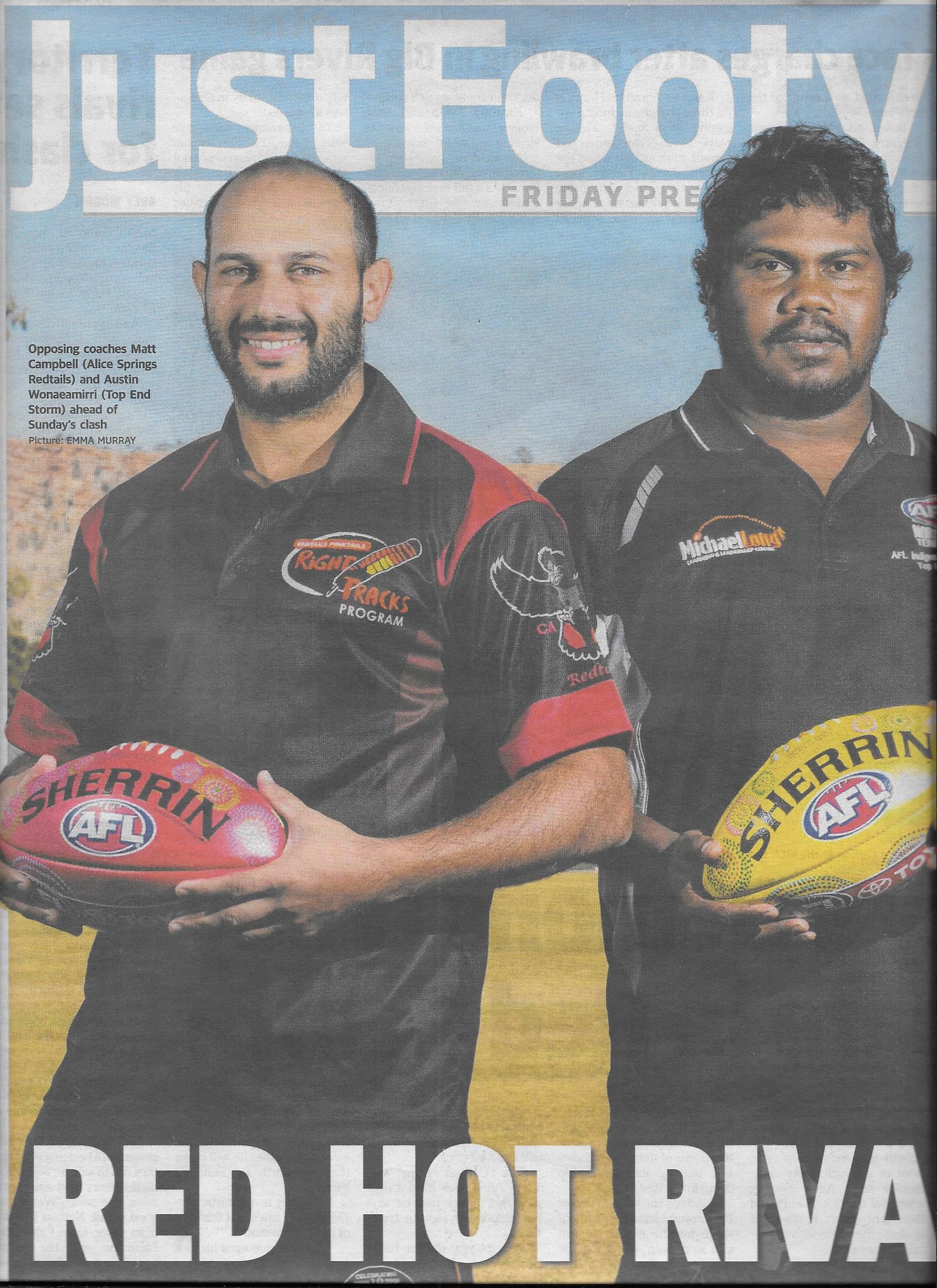 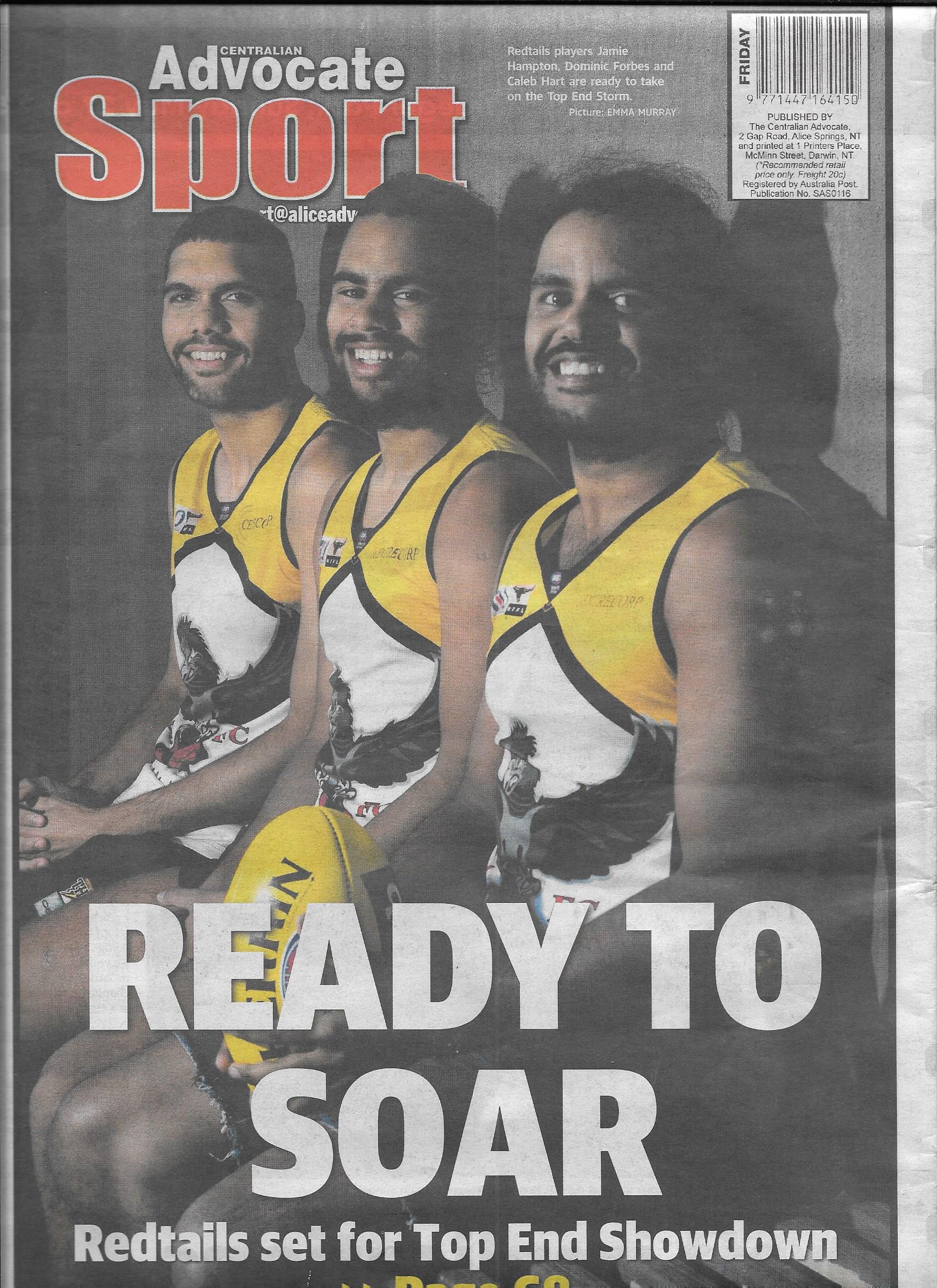 It was a massive lead up with all the organising that was required to set up this amazing game that would be televised by Channel 7 as the Curtain Raiser to the Melbourne Demons v Adelaide Crows round 10 AFL game in Alice Springs at Traeger Park.

There were many interviews including local radio stations and 3AW in Melbourne and video footage taken by Channel 7 so they could create vision to explain to The Nation what our Redtails Pinktails Right Tracks Program is all about, giving our Centralian players and officials a taste of the superstar activities that the AFL Players and Clubs get to be apart of. It was an Amazing experience for them all.

We were also included in the AFL Launch at the Desert Park in the lead up to the game to let the Nation know that not only was the Melbourne Demons and Adelaide Crows coming to Alice Springs to play but our Redtails team would be versing The Top End Storms team as the Curtain Raiser.

Ex AFL player Bryan Taylor and AFWL Melbourne player Daisy Pearce were apart of this process. They interviewed Rob, Ian and many of our players from the Redtails and Pinktails program as well as visiting many of our great tourist attractions to promote Central Australia to The Nation in the add breaks on Game day. Their positiveness and genuine interest the RPRTP was refreshing and encouraging.

It was a 4 week lead up of so many meetings, interviews and general excitement that you couldn't help but get caught up in the exhilaration of the event.

Our new Indigenous design Guernsey's arrived that were created by Curtis Haines, a local aboriginal man who has played football in the region and has been apart of the RPRTP, resulting in his permanent employment at the Alice Springs Hospital as an interpreter.

A lot of nervous energy surrounded the day and was used positively by Matt Campbell(Head Coach) and Rob Clarke to get the players into an optimistic and constructive frame of mind as they got ready for the game against the Top End Storm. Traeger Park was transformed into an AFL Football frenzy with many spectators making their way into the grounds with all their AFL Demons and Crows gear on. The atmosphere was energising. Our Redtails Officials team consisted of Matt Campbell –Head Coach and Assistants – Jackson Ankers, Matt Creeper, Dave Thomas, Graham Hayes, Runner – Rob Clarke, Water Carriers – Jake Clarke, Ebony Miller, Sports Med Trainers – Julianne Prior, Lisa Morgan, Mardi Schulz, Photographer –Kev Prior and Team Manager – Alecia Clarke.

Our lads got away to an encouraging start once the 1st goal was on the board. Everyone was working hard and putting in their best efforts to gather the ball and keep creative movements to allow us to kick 5goals 2 in the first quarter to Top Ends 1goal 2. Gibbo, Mikey, Baydon and Thomas were our goal scorers. Our momentum continued to build as each and every player fought hard in every contest they got to be apart of. They began gelling together like a team that played with each other on a regular basis rather than on a 12 months interval adding a further 6goals 6 in the 2nd quarter to Top Ends 1goal 1 giving us a lead of 59 at the half time break. This trend continued on in the 3rd quarter as the lads found some renewed energy on what was quite a warm day to renegade together to slot another 7goals 1 to our score and holding Top End to 1goal 5 making it near impossible for them to chase down our 91 point lead going into the final quarter. As legs began to tire and energy supplies were diminishing it was a welcome sound to have the final siren blow to reveal a victorious Redtails win of 21-13-139 to Top End Storm 3-9-27. Triumphant elation was evident by our Redtails group in a humble demonstration. Congratulations and respectful comradery were on show for the Nation to see as photos and interviews were conducted all in amongst the 2 AFL teams warm up exercises.

The Redtails and Top End Players and Officials then linked arms with the Melbourne Demons and Adelaide Crows Players to do the symbolic walk to the crowd in a strong message to everyone stating No More to Domestic Violence. It was a chilling and very impressive demonstration for all to witness at Traeger Park and all over Australia on the Channel 7 site. To be so close to and amongst such legends or our great Aussie game as Eddie Betts, Daniel Talia, Max Gawn, Nathan Jones, Jordan Lewis, was an amazingly surreal experience for us all. An experience that we will not forget and will talk about proudly to the future RPRTP players and officials. Hopefully one day we will have a permanent home for the RPRTP to house all the memorabilia of our journey so far and to employ ex players as officials, liaison officers, grounds keepers etc to welcome the next generation of players and help guide them into better life choices, healthier lifestyles, education and employment ~ because ~ This is a program that works.